The Candle Of Light

Light is pure.  It penetrates darkness; it moves with incredible velocity; it nourishes life; it illumines all that comes under its influence.  Therefore, it is a fitting symbol of God, the All Pure, the Omnipresent, the Vivifier of all things, the Source of all grace and enlightenment.  It also represents our Blessed Savior and His mission.  He was “the Light of the world”[John 8:12, NAB] to enlighten “them that sit in darkness and in the shadow of death.” [ Luke 1:79, NAB].   The candle is also the universal symbol for the light of knowledge. 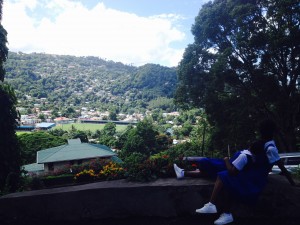 The first community of the Sisters of St Joseph of Cluny was set up in January of 1855 after a request was supported by Bishop Smith in October of 1854 and approval was given by the Mother House in Paris.The Secondary School was founded and is managed by the Sisters of St Joseph of Cluny since 1855. The school, which was situated in the city of Castries, was completely demolished by fire on August 30th, 1959. The Sisters, through assistance of generous benefactors and a valiant Provincial Superior, were able to relocate to this present building in 1961. In 1985, because of the growing demand for Secondary Education and the CXC Syllabus, the Sisters gave over their residence to the School and moved to new quarters lower down the avenue.

The school was a private secondary school until 1979 when Secondary education became free thus making St Joseph’s Convent a Government assisted school .
Government gives a small subvention and a capital grant for maintenance and the paying of ancillary staff and utilities. Parents pay a facility fee which aids in the daily maintenance and supplements the payment of bills and salaries of ancillary staff.
The school has a local board of management with an overarching board in Trinidad. The Board organizes professional development and workshops for principals and senior members of staff in all of the islands where the Incorporated Trustees of St Joseph’s Convent managed schools. Its aim is to harmonize the Cluny tradition of excellence in education across the region and to take it to the next level in the
informatics age.
The school’s curriculum, in previous years, concentrated mainly on the academics.  At present, in order to meet the demands and face the challenges of this era, it now includes a range of technical and vocational subjects. Extra curricular activities and spirituality play major roles in the school’s curriculum.
Each year we provide our students with a new theme to work with – this year ‘s theme is At SJC Everyone Is A Winner.
We have many challenges to face yet “…we shall not neglect anything that could contribute to the promotion and progress of good education.” Letter 105 Anne Marie Javouhey (Foundress of the Sisters of St Joseph of
Cluny)